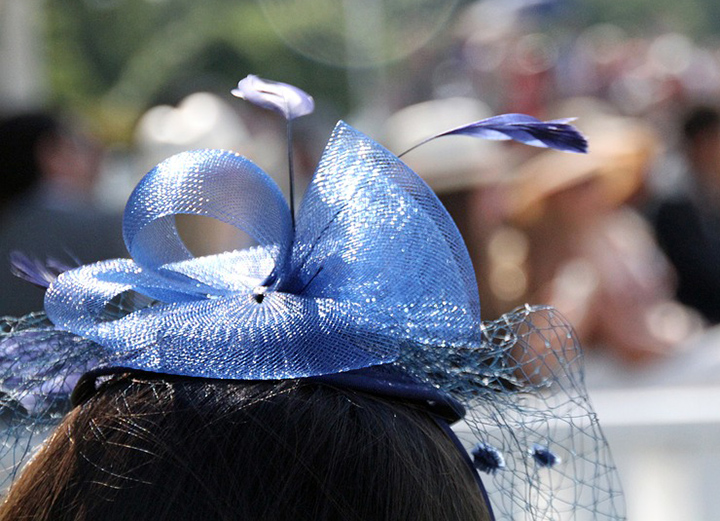 What is a fascinator? And why is it called that?

Simply put, a fascinator is a fascinating headpiece. These mini masterpieces of millinery aren't exactly everyday headwear, but chances are you've caught a glimpse of them on the heads of female guests at the British royal wedding of Prince William and Kate Middleton or more recently, Prince Harry and Meghan Markle.

Fascinators date as far back as the 15th century when it was customary for English women to adorn their heads with veils and pillbox hats. The size, shape, and style of these headpieces evolved over the centuries, yet they always maintained a distinct association with high society.

By the time the 18th century rolled around, Marie Antoinette transformed this idea of wearable objets d'art into the epitome of frippery, using ostrich plumes to decorate her giant pouf of hair along with fine jewels, ribbons, flowers, fruit, figurines, and even miniature ship models.

Today, the fascinator continues its tradition as formal, if not flashy headwear that is worn as as an alternative to conventional hats.

Which brings us to another question: Is a fascinator a hat?

Yes. Fascinators are generally accepted as a type of hat, or at least a subcategory of hat, even though they appear to be more of a head accessory than an actual hat. While one fascinator might come in the form of a small doll hat or decorated round cap perched atop one's head, another might be nothing more than an adornment attached to a headband, clip, or comb.

Celebrity hat designer Philip Treacy, who's worked with everyone from Lady Gaga, Madonna, and Beyonce to Victoria Beckham, Sarah Jessica Parker, and Princess Beatrice, has almost single-handedly renewed the world's fascination with fascinators yet he prefers the term "hat" or "headdress."

Unlike a wool felt fedora or other wide-brim hat, these flashy adornments do not have a brim or a crown that offer any sort of functional purpose. But as you might have guessed, practicality is not the point of a fascinator. It's a purely artistic creation.

Ingredients of a Fascinator

Feathers and rhinestones and mesh, oh my! There are many fabrics, ornaments, and embellishments that can go on womens fascinators, and it's really a matter of how ornate and outlandish or subdued and sophisticated you want to be.

Although some might look like a precarious architectural structure barely balancing on the head, most fascinators are quite easy to wear when fastened to a fascinator headband, which allows for a more symmetrical fit.

From flamboyantly frilly to elegantly elaborate, here are the most common styles for these most uncommon headpieces.

When you're off to the races, a statement-making hat is a must. And there's no bigger horse race in the world than the Kentucky Derby, which has been held every year in Louisville, Kentucky since 1875.

While the horses at Churchill Downs racetrack have always been the main draw, there's no denying that womens Derby fascinator hats are a growing attraction. If you want the flair of a fascinator but the wear of a traditional topper (i.e. a hat with a crown and brim), set your sights on Sazerac by Scala with its dramatic 9-inch brim or Lady's Secret, an sinamay feather and quill fascinator hat. For more options, shop our full selection of Kentucky Derby hats for women and men.

Weddings are one of life's most joyous moments, so why not express the exuberance of the occasion with fantastic headwear? Most brides still adhere to the tradition of wearing a veil on their big day, but fashion-forward brides are finding alternatives to this matrimonial custom with wedding hats, including bridal fascinators.

Whether it's vintage, new, or a handcrafted DIY creation, these hair accessories are no less special than traditional veils and they feature everything from sparkly stones, pearls, and sequins to silk flowers, hat veils, and lace.

Of course, you don't need to be the one walking down the aisle in order to dress up. Browse our womens wedding hats for even more ideas.

Pinkies up! The custom of afternoon tea can be traced to the Victorian era of the 1840s when Anna Maria Russell, the Duchess of Bedford, decided the break between meals was too long. Before she knew it, not only was she drinking tea, eating cucumber sandwiches, and small cakes before dinnertime, but she began inviting friends, thus creating the blueprint for today's tea-time fetes.

And what better way to kick up the festivities than with a fancy party hat? While we're calling them tea party hats, you could just as easily call them cocktail hats or garden party hats. Whether it's an elaborate feather fascinator, floral fascinator, like the Rachel Alexandria by Kentucky Derby Official®, or a small hat clipped to a Gatsby-esque headband, the point of this topper is to have fun, be creative, and express your whimsical side.

You don't have to be an invited guest to a royal wedding in order to wear a fascinator. When you're ready to make a head-turning statement, there are plenty of special occasions to make it happen, whether it's at a tea party, church service, wedding, homecoming, prom, or other celebration.

The key to wearing a fascinator is to have fun, dare to be different, and find the headpiece that will make you feel good no matter how extravagant and out of character it might seem. After all, fascinators are meant to take you beyond the everyday into a world that fascinates. And how could that not feel good?

Don't miss out on our latest arrivals of womens hats for even more fascinating inspiration.