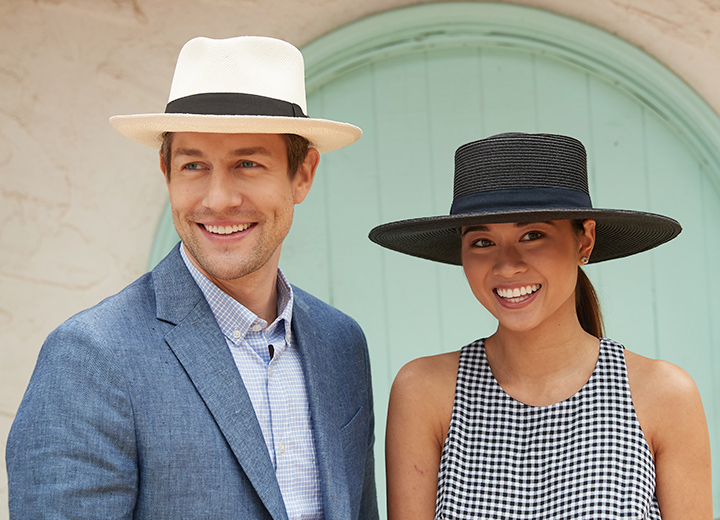 It's the biggest horse race in the world, but let's face it — the Kentucky Derby isn't just about the thoroughbreds galloping around the track. This grand sporting event has also become one of the biggest fashion shows of the year.

Every spring, on the first Saturday of May, Derby goers descend upon Churchill Downs in Louisville, Kentucky to flaunt their outrageous best.

From over-the-top fascinator hats to swishy top hats, cool cowboy hats to sun hats festooned with frilly florals, the spectacle of festive hats is not to be missed. And it’s not just women getting in on the eye-catching action — mens Kentucky Derby hats are no less a sight to behold.

Whether you're heading to Louisville or simply celebrating with a Derby party of your own, we've got you covered with the best hats to complete your Kentucky Derby outfit. But first, we're helping you brush up on your Derby trivia and etiquette.

Run for the Roses

The Kentucky Derby has been held every year in Louisville, Kentucky since 1875. While it has a few nicknames, including "The Most Exciting Two Minutes In Sports," it's most often called "The Run for the Roses," which refers to the blanket of roses draped over the Kentucky Derby winner each year.

The race itself is the culmination of the two-week Kentucky Derby Festival, which first ran in 1935, and features the Great Balloon Race, the Great Steamboat Race, the Pegasus Parade, and Thunder Over Louisville, the festival's kickoff event that holds the title as the largest annual fireworks show in North America.

Fashion has always been an important part of the Kentucky Derby, but it wasn't until the 1960s that flamboyant headwear became the primary spectator sport. While the Kentucky Derby doesn't have the regal pomp and circumstance of a royal wedding, it comes pretty close — with a sprightly Southern twist, of course. Here are a few things to keep in mind when attending the main event or hosting your own viewing party.

You're an original and your hat should be, too. Shop some of the best Kentucky Derby hats for a red-carpet look that will take you to the races in style.

Flowers are a notable part of Derby Day, so why not pick a hat in with eye-catching floral accents, like Sazerac by Kentucky Derby Official®? Composed of gauzy sinamay fiber, the Sazerac exudes Southern charm with an organza flowers that sit above a 9-inch brim. Available in neutral colors, black or white, this hat can pull together any Derby look.

You can't go wrong with a classic fedora and the Highlands Panama fedora from Scala hits the spot. Hand-woven Ecuadorian Panama straw is accented with a black grosgrain band and 2 5/8-inch brim for a look that is dexterously dashing. Pair this piece with a gingham button-down shirt and tailored jacket or a colorful bow tie and suit for a winning combo on Derby Day.

Put this hat on and get ready to channel your inner Southern belle. Boasting an over-the-top 7 1/2-inch brim topped with a whimsical bow, statement quill, and matching feathers, Lady's Secret by Kentucky Derby Official® embodies the gossamer glamour of Derby Day. Try it in lilac for a feminine flourish of "flower power" or turquoise for a look that floats on your head like an alluring sea.

When you want a hat that's pure money, the Furlong bowler hat by Scala fits the bill. Bold but not brash, fashion-forward but not ostentatious, this wool felt hat is your ticket to Kentucky Derby excellence. Whether your horse wins or not, your hat surely will.

If you prefer to turn heads with more class and less flash, look no further than our best selling paper braid boater. Designed with a 4-inch  brim and a grosgrain band and bow, the Diego by Scala plays it cool so you can let the rest of your outfit shine.

You’re the kind of guy who makes a statement wherever he goes, so why would the Derby be any different? Scala's wool felt men’s Damon top hat is an ode to older era, certainly, but it’s a modern version of a classic style with its 6-inch crown and grosgrain bow.

There's no doubt that the Kentucky Derby is one of those time-honored traditions that has captured the imagination of people not only in the United States, but around the world. Over the years, it's grown beyond horse racing into something of a hat lover’s paradise for both men and women. And why not? Maybe the race track isn't so different from a fashion runway.

After all, if you think about it, the horses aren't the only ones dashing across Churchill Downs to reach the finish line — women and men prance around the grounds hoping to best each other's over-the-top fashion. Whether you're heading down south or just want to play dress up for a day, check out our full selection of Kentucky Derby hats for women and men.